Born in Iran in 1984, she has been following her inner motivation to create a deeper connection with music and the plants kingdom, how this two can create a harmonious flow with the body, heart and mind. Holding space and guiding several plant based meditation workshops in Iran and Turkey.

She has been creating and guiding various events of restorative and plants spirot healing sessions in Turkey, Iran and Thailand. She plays setar, a Persian musical instrument with a magical sound that used across Greater Iran and Central Asia, guitar and frame drum. 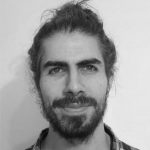 Born in 1988 in Spain, he has been learning to play clarinet at the Conservatory of Music of Valladolid (Spain) from a very young age. After studying Chemical Engineering and Pedagogy at the University of Valencia, he has worked as a teacher and musician, participating in several musical projects such as Country for Syria, country-Arabic music band from Istanbul (Turkey) and films such as Moving into the Infinite by Carola Stieber. He has collaborated recording with many musicians around the world, such as Saul Vanaclocha, Mirtohid Radfar or Bacilio Zea and learned from masters such as Shai Dayan, Harel Shachal and the Gundecha Brothers.

With great vocation for the music within the heart, he has been inspired from the last 7 years in several sufi communities to deepen in the language of the heart, involved as a bridge or connection between different groups in South America, in Europe and in the Middle East. His teachers come from the Chishti lineage of Hz. Inayat Khan, sufi master of India. In this path, he is currently studying and facilitating Dances of Universal Peace and meditative walks. Also it has also been very important in his path to know the master Dr.Oruç Güvenç and the sema meetings organized by TUMATA every summer in Turkey. He has hosted and guided sufi gatherings in Ecuador, Colombia, Brazil and Spain, opening a space to awaken the heart.